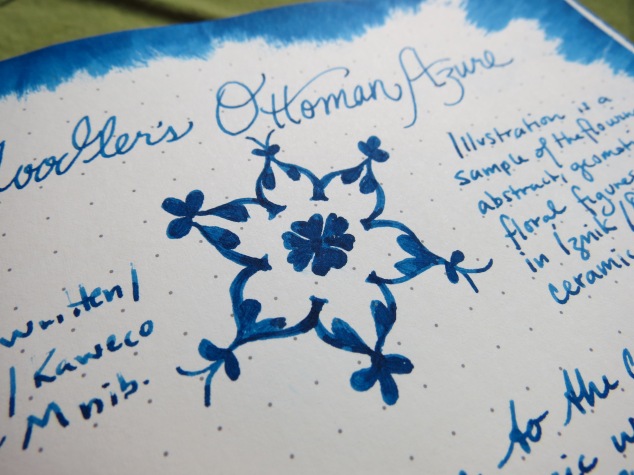 “Ottoman Azure” refers to the cobalt blue paint that characterized ceramic wares manufactured throughout the Middle Ages in what is now modern-day Turkey. It’s a perfectly apt name, and on a delicate white paper, even plain script written in this ink reminds me exactly of elaborate blue figures painted on porcelain tiles. 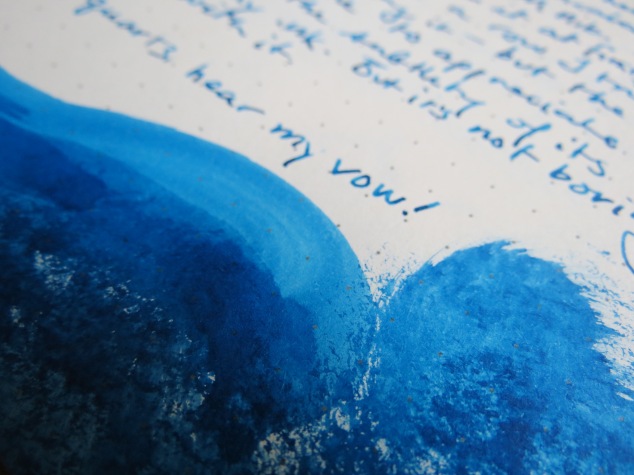 The figure above the fold is a sample of the type of abstract, geometric, floral figures that flow across the delicate curves of Iznik ceramics. And as in a fine piece of Iznik porcelain, dark blue isn’t the only shade you’ll find in this ink; it ranges from cobalt to royal blue to a paler, watery color. It’s not a super-shader but the color variation is definitely there.

This ink was made for illustrating crashing waves! 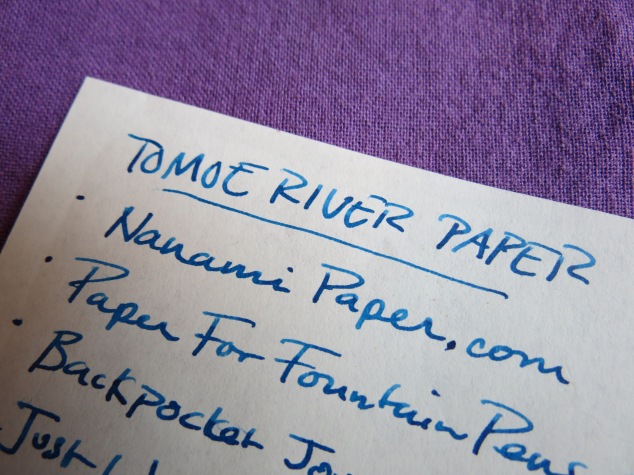 It even turns list-making into an artistic project. (List written on Tomoe River paper, as opposed to the Clairefontaine in the other photos.)

The ink is wet, but not overly lubricated, and it makes the most of my fussy Kaweco M nib. I have to admit I was disappointed by it at first, since it is clearly in the same color family as De Atramentis’ Myrrh, which I had previously tried out — but the longer I use it, the more I come to appreciate the depth of its color and the subtlety of its shading. It doesn’t have that turquoise glow like Myrrh does, but rather it’s a true blue. It’s not a flashy ink. But it’s not boring, not if you’re patient with it. 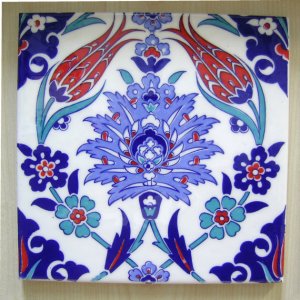 In researching this color, I discovered that the Ottoman empire developed the underglaze technique that allows for polychromatic decoration. They typically painted their wares with up to seven colors, including sage and aubergine, or (later) red and turquoise. The blue itself shifted over the centuries from a dark, almost indigo color to a lighter azure. I recommend pairing this with Noodler’s Nikita and Caran d’Ache’s Hypnotic Turquoise for a modernized, Iznik-esque palette.

A professional recording studio in Columbia, MO where you can relax and make it sound the way it does in your head.

Creativity In The Box

Speaking When the World Sleeps

The blog of a bad survivor

I'm back in Moscow - again. I'm ready for great time with old friends and many months of more Russian adventures.

musings on the hand-written life

The Nib Creeps
the lone lands

a topography of dysfunctional grey matter

Where we all can come together

Our bricks & mortar shop is at 250 Carlaw Ave, Unit 105 in Toronto, Canada - shop online at wonderpens.ca

For the love of pencils